Gnat Funny At All… Fungus Gnats: No Friend Of Mine

A small (literally and figuratively) issue we often run into with plant pests indoors is the presence of Fungus Gnats.

Fungus gnats are tiny, harmless flies that usually do little to no damage to the plants but can be very annoying.  They are ubiquitous to greenhouses where indoor plants are grown and generate from the soil itself, feeding on organic matter as tiny grubs and emerging as adult flies.  Only in large numbers do they pose a threat to the plants themselves, in some cases chewing and destroying the root system.

They are also harmless to humans–they don’t sting, bite, or cause any other threat.  Unfortunately, they can be quite annoying.  They are naturally attracted to light (which makes them fly near computer screens) as well as the carbon dioxide we exhale (which makes them sometimes fly near our faces) and subsequently can be a real nuisance in an office setting.

Where do they come from?  Like I tell all clients when I’m asked: Nature finds a way.  Though they often generate due to overwatering of plants, years of experience has told me this isn’t always the case.  They’ll either hitchhike up on brand new plants we get from Florida, and they also seem to have two particular times of year, Spring and Fall, when they show up more prominently than other times of the year.

In any event, controlling them is not a problem.  The simplest method of controlling/ridding an office of them should there be just a few are yellow “sticky traps” placed in the plants–basically scentless, harmless flypaper.  The gnats are drawn towards the bright color, land to hang out for a little bit and kick their feet up, and then get stuck. 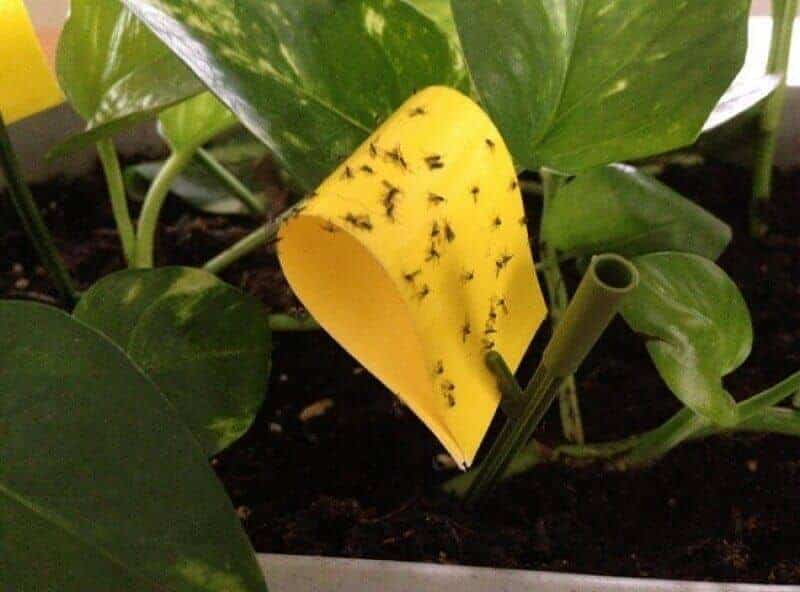 The next step after that is to use some biological method of control that’s more or less a trade secret, but is safe and harmless as well and usually does the trick.

Because of the life cycles of fungus gnats, it’s important to remember that soon after you let us know of their presence, and we take steps to eradicate them, it may take a week or two before they’re completely gone.  But though they’re a problem, they’re easily dealt with and we do take them seriously–usually we get someone out to take care of them for you shortly after you let us know.