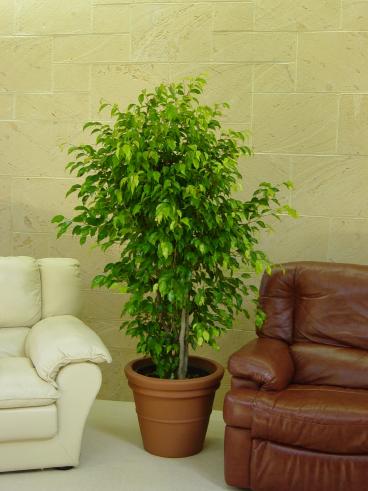 Probably one of the best known office plants, the ficus tree is native to the Indian Subcontinent but is now found growing throughout all tropical and subtropical environments, from the Caribbean to even being used as an outdoor ornamental tree and shrub in Florida. It has some popular cousins as well–the Rubber Plant as well as the Fiddle Leaf Fig plant, both of the genus Ficus, that also both share the same light and water requirements of the Ficus.

Indoors, ficus trees like lots of light and they dislike drafts and stuffy corners or closed rooms. This presents a challenge in many offices because people generally want the look of a ficus tree and it can be difficult to explain that they can’t be in a small, stuffy single office because they prefer a generous amount of both light and fresh Co2, but not generally a draft blowing on them, or they tend to lose all their leaves.

They tend to rebound quickly though, and a ficus that loses all it’s leaves is best stripped of the rest and slowly nursed back to health over a few months so that it fills in properly. We’ve transplanted huge, 9 foot specimens and had them bounce back within a matter of months.